He only made four films, but Erland van Lidth was equally memorable in all of them. His large size was part of the reason he was noticed. The other was his talent, for he was more than just a big-boned actor. He knew how to take full advantage of his presence to get the most out of every role he played.

Whether through intimidation or sympathy, his characters managed to keep audiences wanting more. And even though his parts were supporting ones, he was the actor that made people want to sit through the credits to discover his name. 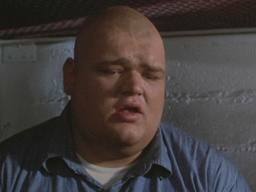 Three of his four films have a fan base. Anyone that has seen The Wanderers, Stir Crazy  or The Running Man, will never forget Erland van Lidth as Terror, Grossberger  or Dynamo. His beautiful operatic voice was dubbed for Stir Crazy, but in The Running Man, what you hear is the real deal.

Erland van Lidth died of heart failure in 1987. His movie career was brief, but memorable. And since Hollywood missed her opportunity to use him in other projects, he only left four films for people to view and discover. And what they will find (besides being entertained)  is another actor that is Not Very Famous...but should be.
Posted by Mike Trippiedi at 5:00 AM