If you're a Ron Howard fan then you probably think that the famous director cast his little brother in small, insignificant roles in his movies just as a family obligation. However, if you are a fan of low budget cinema, then you know this is not the case, for Clint Howard has proven that as an actor he can act rings around his famous director brother.

Like his more famous sibling, he started out as a child actor. His big break was in the family show, Gentle Ben, but that didn't prove to be the hit that the Andy Griffith Show was for his brother. As he aged, Clint Howard guest starred in a wide variety of television shows like Family Affair, The Virginian and Night Gallery  just to name a few. 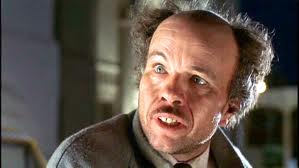 And while he often appears in many of his brothers films, like Apollo 13 and Cocoon, it's his low budget career with unknown directors that has proven to be the calling card of Clint Howard. Check out his work in Rock 'n Roll High School, Evilspeak  or The Ice Cream Man  if you don't believe me.

Even though his work in everything he does is quite good, the words, "award winning" will most likely never come before his name. As actors go, though, Clint Howard works steady and for an actor that's all that really matters. Congratulations Mister Howard for being the pick of the day for Not Very Famous...but should be.
Posted by Mike Trippiedi at 5:00 AM