In 1989, with a promising career ahead of him, actor Merritt Butrick died from AIDS at the young age of 29. Some say it was drug use, others say it was his lifestyle. However, the only true fact worth arguing over, is that if he had not been sick, his career may have gone far.

He's most remembered for the critically acclaimed, but little seen high school themed sitcom from 1982, Square Pegs, as the new wave geek, Johnny Slash. In that series, Merritt Butrick consistently upstaged his co-stars Sarah Jessica Parker, Tracy Nelson and Jami Gertz. Had the show caught on, his character most likely would have gained mainstream status and like Fonzie on Happy Days, just might have turned into the star of the series. 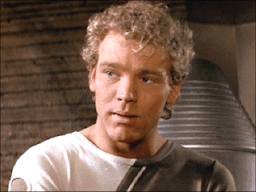 He also appeared as Captain Kirk's physicist son, David Marcus in Star Trek II: The Wrath of Khan and Star Trek III: The Search for Spock, as well as the hillbilly son of Barbara Hershey in another critically acclaimed, but little seen project called Shy People.

At the time of his death he had recently received critical praise on stage for his role as a male prostitute in the play Kingfish. It's likely that he would have returned to films or television and eventually graduated to more adult roles. But like so many talented actors that have died at a young age - we'll just never know.
Posted by Mike Trippiedi at 5:00 AM