Like so many gifted actors before him, Ray Sharkey traded in a promising career for the demon known as drug addiction. His sickness cost him his reputation in Hollywood and eventually led to his death in 1993 from AIDS.

Had he taken a different path, Ray Sharkey could have rewritten the history books when it came to Oscar and Emmy nominations. Instead, we're left with a few brilliant performances, a handful of really good ones and the sad reality of what could have been. 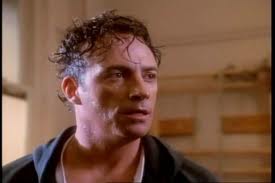 In the 1970's he started appearing in movies like Who'll Stop the Rain, with Nick Nolte and television shows like Barney Miller, but it wouldn't be until 1981 before he would get the role that would really put him on the map - that of the driven rock promoter, Vinnie Vacarri  in The Idolmaker. That role earned him a Golden Globe, and should have gotten him an Oscar nomination, but sadly that didn't happen.

Ray Sharkey  proved once again that he was the real deal in the made-for-television movie, The Ordeal of Bill Carney, were he played a man paralyzed from the neck down trying to be a single father, as well as probably his most famous role - the gangster, Sonny Steelgrave,  in the television hit, Wiseguy.

It was his reckless reputation, though, that made Hollywood leary of giving him good roles in A-list movies, making his resume misleading to the talent that he possessed. Ray Sharkey could have gone far, but his legacy is now more of a lesson to be learned, instead of an artist who should have contributed more.
Posted by Mike Trippiedi at 5:00 AM