Jenny Wright first caught my eye in the Off-Broadway production of Album, where she co-starred with a then unknown Kevin Bacon and Keith Gordon, who has not been profiled on this blog yet, but should.

Supporting roles in The World According to Garp, Pink Floyd's The Wall and the made-for-television movie, The Executioner's Song followed, which lead to more exposure in The Brat Pack films, St. Elmo's Fire and Out of Bounds. 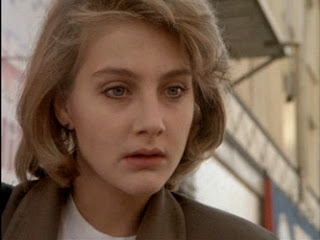 Had Jenny Wright continued on this path, she most likely would have moved up the Hollywood ladder. She certainly had the talent to be a major star. Instead, she went the independent route with top-notch performances in Near Dark, Twister (not the Helen Hunt movie) and I, Madman.

Fans of her independent work know of her potential. For those only familiar with her mainstream movies - you are missing out. Jenny Wright has since retired from acting, but will occasionally show up at b-movie conventions. This wonderful actress is still young enough to make a comeback. Let's keep our fingers crossed that she'll some day return. We miss you Ms. Wright.
Posted by Mike Trippiedi at 10:51 AM