Fans of the made-for-television movies of the 1970's may remember Scott Jacoby, for he seemed to be in a lot of them. What separated him from the other television actors, though, was the fact that he was often in really good productions.

In fact he even won an Emmy for one them - That Certain Summer, where he played a teenager trying to cope with his fathers homosexuality. This was a big deal in 1972 and he brought to the subject sensitivity and honesty, which wasn't always the case with a made-for-television film. 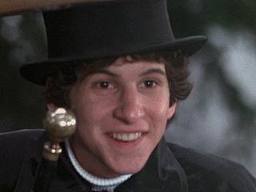 This was followed by another memorable television performance in the creepy, Bad Ronald, where he played a teenager who lived inside the walls of a home owned by another family. A lot of guest starring work on television shows like The Rookies and Marcus Welby, M.D. came next, as well as a co-starring role opposite Jodie Foster in the theatrical release of The Little Girl That Lives Down The Lane.

But a film career never developed. At that time, television actors rarely crossed over to feature films and with his success on the small screen it looked like he was there to stay. However as the networks cut back on their made-for-television movies, Scott Jacoby disappeared from the limelight.

It's now been over twenty years since he as been seen on any screen. He was a talented young man and it would have been interesting to see where his acting career would have taken him. Instead, Scott Jacoby will just have to settle for being Not Very Famous...but should be.
Posted by Mike Trippiedi at 5:00 AM