John Travolta received all of the attention when Saturday Night Fever came out in 1977, but it was Barry Miller in the role of Bobby C that caught my eye. I found him to be the most interesting character in the film, and I don't credit the script for that. I credit the actor.

The more movies I saw Barry Miller in, the more I was impressed with his acting talents. And then a few years later when his wonderful performance in Fame hit the theaters, I figured he was well on his way to becoming a household name. I was wrong. 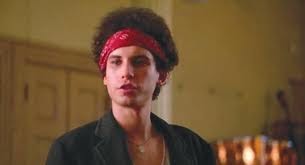 More memorable performances were to follow in films like The Chosen and Peggy Sue Got Married, as well as the short-lived, but very good television show Equal Justice, in which he was nominated for a Golden Globe. However, it appears that the only medium to really appreciate his talents was the theatre, as he won a Tony Award in 1985 for the Neil Simon play, Biloxi Blues.

Barry Miller hasn't done any major film or television work for almost ten years now. And I'm keeping my fingers crossed that his days in front of the camera aren't over.
Posted by Mike Trippiedi at 5:00 AM