Steve Inwood is one of the many talented actors that seems to have disappeared from the film and television industry. As far as I know he's still alive, but appears to have not made a movie in over ten years.

One of the reasons people may not have heard of him is because most of his work was either as a guest star in numerous television shows, co-starring roles in movies that not many people saw, like Prince of the City, or smaller roles in high profile films like Fame where the young ensemble had much more screen time. In Fame, he played the sleazy photographer that gets Irene Cara to take her top off. He only has two scenes, but he's hard to keep your eyes off of in them. 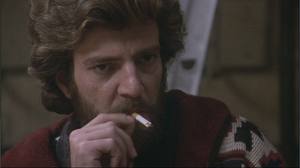 He also has probably gone unnoticed all of these years because he completely changes in appearance from role to role. For what's it's worth, I've noticed his work and am extremely impressed.

Check out his work in Staying Alive, The Human Shield, Fame and the made-for-television movie A Question of Honor and see for yourself why Steve Inwood is my pick today for Not Very Famous...but should be.

Oh, and Mr. Inwood; if you should happen to stumble upon this, let us know what you're up to.