From 1978 to 1984, Craig Wasson had major roles in many high profile films and then like so many promising actors before him, drifted off the radar.

He caught the eye of many in 1978 when he appeared in two popular Vietnam movies, The Boys in Company C and Go Tell the Spartans, but it was his role as Danilo, the Yugoslavian immigrant in the wonderful coming of age film, Four Friends that film audiences started to take notice. This was followed by Ghost Story where Fred Astaire, Melvyn Douglas, John Hauseman and Douglas Fairbanks, Jr. where his co-stars. 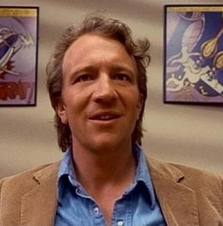 Craig Wasson is probably most remembered for his work in Brian DePalma's homage to Alfred Hitchcock in the equally loved and hated Body Double, which in the late 1980's was on television every time one turned on the TV.

He's still a working actor, doing some amazing voice-over work in a variety of current audio books. His most recent is the new Stephen King thriller, 11/22/63. With his early success in movies, one can only wonder as to why he never became a well known star. Check out some of his work and see for yourself. Then you will understand why Craig Wasson is today's pick for Not Very Famous...but should be.

Posted by Mike Trippiedi at 5:00 AM