If anyone remembers Robert Sorrells today, it is most likely from the murder he committed in 2004 and not for his memorable work as a guest star in many popular television shows from the 1960's.

Although probably most remembered as the robot baseball player in the Twilight Zone episode, The Mighty Casey, his best work was in television westerns such as Gunsmoke, Rawhide, Bonanza, Daniel Boone, Lancer, Kung Fu and Death Valley Days. And although Robert Sorrells guest starred in other shows like The Waltons, Judd for the Defense and Cannon, as westerns faded from television, so did this wonderful actor. 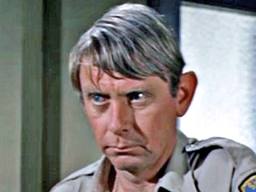 Smaller roles in films like Bound for Glory and Fletch would follow, but by 1990 his very busy career had come to a stand still. Then on July 24, 2004, after an earlier argument, Robert Sorrells walked into a bar and opened fire, killing one man and seriously wounding another. He pleaded guilty and was sentenced to life in prison.

Robert Sorrells is remembered these days as a murderer, and will most likely be forgotten as the fine actor he once was. A sad legacy for a talented man.

Robert Sorrells died in prison on June 11, 2019. Of the over two hundred actors profiled on this blog, he managed to bring out the most complete picture of tragedy through all of the comments in this section. His work will live on and sadly, so will the pain that two families have endured through his actions. I hope people will continue to use this blog to post stories and share their love, anger and frustration, for it is through all of your comments we have gotten to know, for better and for worse, the life of a talented but extremely flawed man.
Posted by Mike Trippiedi at 5:00 AM