Unlike many actors, O-Lan Jones has never waited tables.  She has, however, portrayed a waitress in many films that range from Miracle Mile  to The Truman Show  and several in-between. And while the "waitress" character in many films may not be an actors dream role, this gifted performer has managed time after time to turn a one dimensional character into something much, much more.

Probably best known as the Christian neighbor, Esmeralda, in Edward Scissorhands, O-Lan Jones has quite an impressive resume that ranges from a mob wife in Married to the Mob  to Sally Skull, the prostitute with the short fuse in Lonesome Dove. 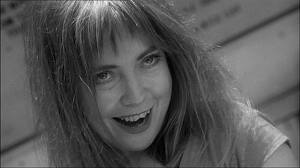 Primarily a day player, her work goes way beyond that of an actor that usually just shows up in a scene or two. But like the great performer she is, fame has taken a back seat to being an intricate part of many movie and television ensembles.

Her roles are rarely large, but always memorable, like her brief encounter with the two lead characters in Natural Born Killers, where she plays yet another unforgettable waitress. Or the hotel maid in Pacific Heights or the tough female prisoner in Convicted: A Mother's Story, or the...well the list goes on and on, making O-Lan Jones the pick of the day for Not Very Famous...but should be.
Posted by Mike Trippiedi at 1:36 PM