Tim McIntire died of heart failure at the young age of forty-one brought on by years of alcohol and drug abuse. Maybe his wild past is the reason why he never received the recognition he deserved because he was about as underrated as they come.

Just watching him in his numerous roles, both leading and supporting, makes me wonder why his acting talents never lead him to Hollywood royalty. 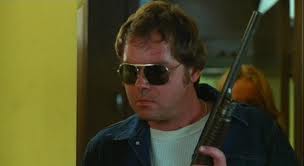 From The Sterile Cuckoo  to The Choirboys, and The Gumball Rally  to Fast-Walking, Tim McIntire had a presence that was hard to ignore, often upstaging the bigger name actors he played along side. Even his voice-over work is memorable as is evident in the sci-fi cult classic, A Boy and His Dog, where he supplied the voice of the shrewd dog, Blood.

However, if you want to see this wonderful actor at his absolute best, look no further than American Hot Wax, where he played the infamous 1950's rock-n-roll disc jockey, Alan Freed, and you will see for yourself why Tim McIntire is Not Really Famous...but should be.
Posted by Mike Trippiedi at 5:00 AM