James Olson is now retired from the business, but in the 1960's, '70's and '80's it was hard to turn on your television and not see him as a featured guest star in many of the top westerns, dramas and police shows of that time.

However, he did more than just appear in many of the classic programs, as he often upstaged the stars of those shows like Peter Falk, Richard Boone and Raymond Burr, just to name a few. 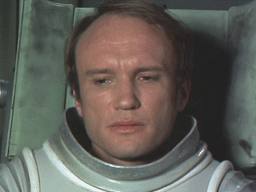 Underrated is an overused term, but it's the only word that I can think of that properly describes the talent of James Olson. Many talented actors like himself tend to get lost among all of the episodes of so many shows that aren't always available to the younger generation. That's why it's good to know that he was also a stand-out in movies as well.

His work in The Andromeda Strain, Crescendo, Rachel, Rachel, Ragtime and a whole slew of made-for-television movies like The Family That Nobody Wanted and The Court-Martial of George Armstrong Custer are actual proof as to why James Olson is Not Very Famous...but should be.
Posted by Mike Trippiedi at 5:00 AM